On Friday June 17th eleven members of the club put on a private car show for the residents of the Port Charlotte Rehab Center on Rampart Blvd. A great time was had by the residents as well as the staff.

The officers of the Peace River Corvette Club and Members are strongly involved in efforts supporting the Charlotte County Special Olympics of Florida.

January 08, 2023 will be PRCC's major fund raiser for the Special Olympics. We are preparing for a great turn out.

Donating to the Special Olympics - 2021

The Regional Director of Special Olympics South West Florida, Mr. Ken Roop visited with the Peace River Corvette Club officers to receive the donation. The club voted to donate $850.00 plus, individual members made donations making the total of $1000.00. We all learned more about the Special Olympics and all the things they do for the Athletes. One thing that was Heartbreaking, sixty percent of all special need folks live in poverty. In the future we will invite Mr. Roop to one of our meetings to tell us more about the organization. Left to right is Diego Bentancourt, Ken Roop of Special Olympics, Cathy Bohling, Jerry Suminski and Ron Kuchar.

Congratulations To This Years Scholarship Winners

funds raised from the 2018 Poker Run. Each student received a check for $600.00 payable to Charlotte Technical College to support their automotive education at the College. Dylan’s girlfriend, Stormy Jenkins and Laura’s grandmother Joann Buell were also present. Tom Viele, Automotive Program Coordinator thanked the Club for the continued support of the College’s automotive program and shared that each student selected was well deserving of the honor received. 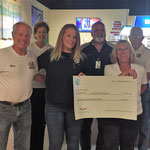 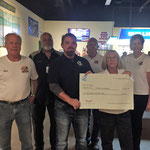 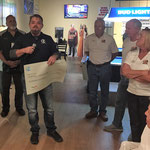 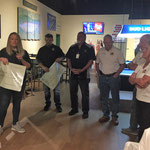 Several Members of the club participated in the Hurricane Michael Relief event held at Bill Buck Chevrolet,  following the lead of Karen Shepard who donated all of her raffle winnings back to the relief fund.